Skip to the beginning of the images gallery
Product Description

Spectrum Marketing Segmentation allows you to perform the many profiling aspects needed to create a comprehensive sense of your marketplace as well as analyze your customers.

What we find is that people tend to live near people "like themselves". So we need to figure out where these clusters of like-minded people live.

The Spectrum interface allows the user to answer four different sorts of questions:

The "kinds of people" are technically called "sociological profiles" or just profiles. These groupings of households that share certain sociological traits and create sub-cultures share common characteristics (such as age, income, race, household structure, education, etc). In order to expand your market you need to know who your customers are and then where to find more people just like them.

Regardless of which type of report you want to run first there are two key terms that you need to understand.

The first is Household Number - this does not refer to how many households are in a given geography but rather how many of the households qualify for that specific segmentation definition. The other way to think of this is that it is showing you the market size for that segment in that given geography. So if there are 300 households but only124 meet the definition for a given segment then the Household Number is 124, not 300. And for each of the segments in that given geography they will have a number that will be between 0 and 300. If you are looking at an Urban area then all of the Rural and Suburban defined segments will rank very low. And the sum of the Urban segments should sum close to 300 (there may be some double counting or some households that are not covered so it will not be exactly 300).

Rank - this is a way of knowing how well a segment matches your geography. The rank is a number between 0-100. So for example when looking at the block groups for Middlesex County, NJ (our office location) there are 584 block groups which each had a number of households in them, and for each there was some percentage that met the segmentation selected (in this case P14 - families with children living with them).

The Rank tells you that of all the block groups in the county, if you listed them from largest to smallest the top ranking one gets given a 100 the lowest ranking one gets a zero and then everything else is given a number between 0 and 100. If two block groups have the same number of qualifying households they are given the same rank and treated as a single number even if there are 50 block groups that have that same number. So in fact there will not be 584 individual answers for this county but some significantly smaller number. Further the numbers are skewed to the bottom. There will be many more duplicate numbers in the lower end of the range than at the upper end. For example many block groups may have 0 households that qualify for a given segment but very few will have 1487 households - in fact only one does. 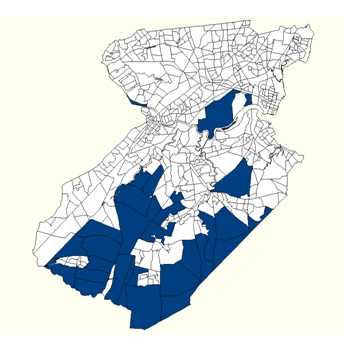 There can be parts of metropolitan and nonmetropolitan areas where there are both urban and rural territory. For example in Middlesex County NJ (where our office is located) most of the area is Urban (white) but there are block groups that are Rural (blue). In fact there are even areas that contain both Urban and Rural counts within a single block group.

Suburban areas are those areas that have Block Groups that are Urban but that are outside of the Urbanized Area.

Other companies create a national set of income criteria - that is to say that a single range is set for the definition of Middle Class or Poor or Upper Middle Class, etc. This is also what the US government does - setting one number for the poverty threshold.

2. Why we wanted to do it differently

We felt that this sort of flat, national number unfairly penalized the less expensive parts of the country and over-counted the more expensive regions. 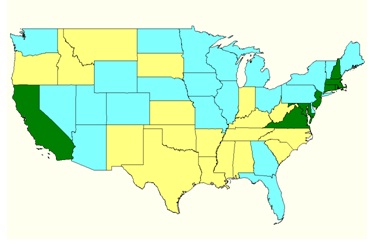 For example if middle class was defined as a household income of $35-50K it means that you would qualify those who make $32K in Arkansas as lower middle income and someone who makes $50K in California as middle income. But the difference in cost of living is very different for these two areas. For example the average rent in Arkansas is $614.30 a month, whereas in California it is more than twice that at $1335.70. And housing costs are much more extreme if you look at the cost of buying a house. The average house in Arkansas is worth $85,450 whereas in California it is valued at $510,054 - almost 6 times more. So it is not surprising that folks in California need to get paid more just to have equal buying power compared to a dollar in Arkansas. Thus the median household income is 26% higher in California ($58,153) compared to that of Arizona ($46,076).

Instead of using a single, national set of numbers we calibrated every block group up against the median income of the MSA (City including its surrounding suburbs) that it was located in. For those block groups that were not in a city we used the county level median income. This will then better identify where there are households with disposable income - regardless of the actual dollars.

Our reasoning was simple. If you want to know who makes $35-50K, then you can use the Estimates or the census data and you don´t need us to build that for you. But if what you want to know is, where are the richer parts of this town. If the whole area is affluent, then where are the really rich parts of town. If you are trying to market a luxury product then this will give you the real edge. This will allow you to reach those neighborhoods that have more money than their neighboring communities and want to be the early adaptors in new luxury items. It isn´t enough to just mail to areas that make $65K because in California that isn´t really "rich" whereas in Arkansas you could have mailed to folks who are only making $58K because they will feel "richer" than those making $65 in California.

The national Median Household Income is $44,552 - but as you can see from comparing this to the chart above of the 30 largest MSAs - this is much higher than some (ie Pittsburgh) and much lower than others (for example DC).

The SPECTRUM segmentations are a way of breaking down the population into groupings that share some common characteristics. These are categorized using several common demographics: income, age, family structure, location, education, race, educational attainment, etc.

Different areas have different types of people. To make matters more complicated one household can belong to multiple profiles. For example the profiles that segment for age and the profiles that deal with what kind of housing stock is in the area are not related. So you can have seniors living in new houses or in historic ones and likewise you can have young, singles living in new houses or historic ones. Some segments however are mutually exclusive; you cannot be both living in a new house and a historic one.

We have built 38 profiles that are based on defining a particular group of people based upon multiple common factors (age, family structure, housing location, income, etc.) In addition we have built single variable definitions so that you could build your own cross-tabulation in the "Find People" component of our Spectrum profiling demographic product.

First, the easy, single variable definitions, broken out by category.

Now the more complicated multi-variable definitions. These will include some but not always all of the following: income, geography, family structure, age, and a few others. These are grouped by geographic location.

A market potential analysis may include:

There are lots of ways of representing data that make it easier to use and understand. Here are three approaches that are easily run from Spectrum - the pie chart, bar chart and spreadsheet. In all three cases you can see that most people in zip code 08816 are on the upper end of the income scale - breaking into fourths with the bottom two income levels together equally the smallest 1/4 , the next 1/4 is Middle class, and then the top half are upper middle class and upper class - where Upper Class is the largest of the quarters. 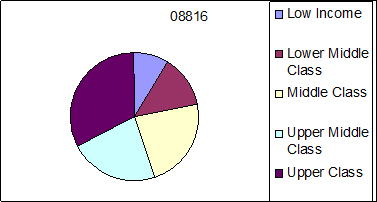 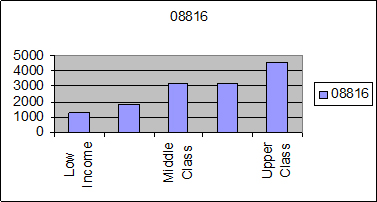 With our Address Profiles component you can determine what kinds of people live near a given address (store location), as well as how many of these sorts of people are there in the immediate vicinity.

For example for our office, 28 Brunswick Woods Drive, East Brunswick NJ 08816 we are told that there are a total of 2401 people who are profiled as follows:

These profiles are sorted in "Rank order". The rank is a number that tells how well this attribute aligns with the definition. The highest score is a 100 and the lowest is a 0. So a profile with a rank of 20 is significant less indicative of this area as a category whose rank is 42.

Some of these groupings cross each other - for example "Rich families from a Second Tier City" will include those who live in a "Minor City". But there are folks in the minor city who are not rich, so this second count is much lower.

One of the basics of launching a new business or opening a new store is that you need to determine whether there is demand for your products/services, that is to say what is your potential market size.

Spectrum Marketing Segmentation helps you figure out the potential economic opportunity available to you in a given geographic market. Whether you sell products or services to consumers, market sizing provides you the basis you need to use resources effectively.

You can also use it to rank or prioritize several potential markets - if you hope to open 5 new stores, which order should they open in, which have the greatest chances of success?

You can also use these numbers - how many potential customers are there to determine market size which in turn will give you potential revenue but it will also allow you to calculate your current market share penetration in a market that you are already fully committed to - how much more potential is there for you to expand in this area?

For example if your market was selling to owners of older homes. Then when we look at the number of homes in the zip codes in NJ by age of housing unit (historic, modern, new) we see that Zip code 07001 is a mix of all 3 but none of them strongly. As opposed to zip codes 07002 or 07003 both of which strongly correlate to Old, Historic Homes by rank AND have large Counts for the Historic Homes.

Find New Markets for your products. In order to expand your market you need to know who your customers are and what common themes or traits they share.

Spectrum´s Market Segmentation selection My Address List allows you to profile your entire list of customers so that you can determine what your customer base looks like. By segmenting your list by product line you can also differentiate your customers by profiles by product line. For example do your customers for your most expensive product line look the same as those who purchase the mid-range option? Run them as separate lists and see how similar or different they really are.

Most of us have as a largest marketing challenge determining who our customer is and then where to find more people just like them. "My Address List" solves the first part of this question and then "Find People" will solve the other half.

Reasons to Profile YOUR Customers